A useful color picker tool. You may select the color from any image or any object in the browser. 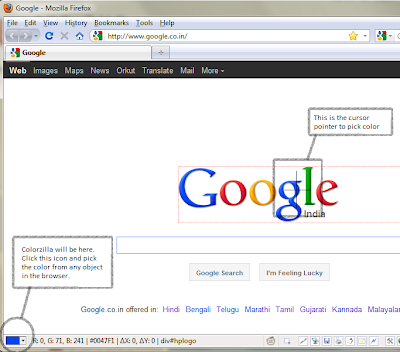 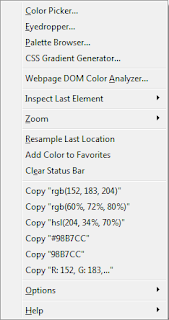 Click here to INSTALL the extension
Posted by Unknown at Saturday, December 17, 2011 No comments:


WITH temp_table AS
(
SELECT TOP (SELECT COUNT(*) FROM [table_1])
firstname, lastname, mobile, email,
ROW_NUMBER() OVER (ORDER BY zip_code) AS row_no
FROM
[table_1]
ORDER BY zip_code
)
SELECT
first_name,
last_name,
email
FROM
temp_table
WHERE
row_no BETWEEN 1 AND 10


WITH temp_table AS
--create a temporary table named temp_table
(
SELECT TOP (SELECT COUNT(*) FROM [table_1])
--table_1 is the original table
--top is an essential keyword when you use orderby keyword in this sub query else you can ignore TOP keyword
-- I have fetched the rows count to fetch the entire rows, this means no difference when considered as a independent query but just to obey the inner query Syntax, that is TOP keyword should be used while using order by in the sub query
firstname, lastname, mobile, email,
--just fetching some fields
ROW_NUMBER() OVER (ORDER BY zip_code) AS row_no
--generate row number with a custom field in the temp_table for the rows fetched from the original table
FROM
[table_1]
--original table
ORDER BY zip_code
--order by inside sub query is the complex part. I remind, use TOP keyword when using order by keyword.
)
SELECT
first_name,
last_name,
email
--simple select query from the temp_table
FROM
temp_table
WHERE
row_no BETWEEN 1 AND 10
--now we can set between values to fetch records. Hope this is self explanatory, you can set 11 and 20 to fetch the next set of 10 records and so on.


Please share your comments and suggestions. You may also post your questions and doubts here.
Posted by Unknown at Thursday, October 20, 2011 No comments:

n is actually an expression. That is, it is capable of performing calculations to derive the final number of records to be retrieved.

Optionally you may also use PERCENT keyword next to the n to denote the input for fetching number of records is on percentage. That is, the following Example 2 will fetch 10 records from a table containing 100 records. When n is used as percentage, n will be treated as float.


It is as simple as above. I am publishing this on my blog because this is the most frequent database related question most people asked me.

Steve Jobs - The i Genius

Steve Jobs, the i Genius, co-founder of Apple Computers, passed away last night. I really miss him as a tech brain and a genius business man who brought world a new way of computing.

What's inside the link?
Steven Paul "Steve" Jobs (February 24, 1955 – October 5, 2011) was an American computer entrepreneur and inventor. He was co-founder, chairman, and chief executive officer of Apple Inc. Jobs also previously served as chief executive of Pixar Animation Studios; he became a member of the board of directors of The Walt Disney Company in 2006, following the acquisition of Pixar by Disney. He was credited in Toy Story (1995) as an executive producer. Click here to read more

Posted by Unknown at Thursday, October 06, 2011 No comments:

Email ThisBlogThis!Share to TwitterShare to FacebookShare to Pinterest
Labels: News

IRCTC (www.irctc.co.in) is one of the busiest websites in India. It is ticket booking portal of one of the most popular and worlds largest Railways, The Indian Railways.

Besides all the popularity and red ribbons it has some glitches. I am sharing a few that I found.

To increase user experience:
Posted by Unknown at Monday, July 25, 2011 No comments:

Email ThisBlogThis!Share to TwitterShare to FacebookShare to Pinterest
Labels: Reviews 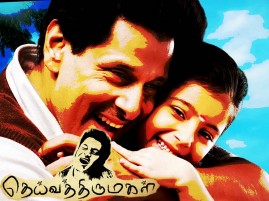 This is the first time I am writing about a movie on a blog. I watched Deivathirumagal (2011), a beautiful Tamil movie on Fatherly love, yesterday. Many said it is so emotional and audience burst our of tears.. blah blah.. tears doesn't matter when it really worth shedding! Hats off to direction and screen play.. Many appreciation goes to the involvement of the crew.. They all act as such in reality. Santhanam's conversation blended comedy is another big plus.. Many where complaining that this movie is taken from a movie "I am Sam". After all many good movie stories are taken from Novels it is of no matter where the original story is taken from but it is all about the presentation to the target audience. Do you agree?
Posted by Unknown at Monday, July 25, 2011 No comments:

Email ThisBlogThis!Share to TwitterShare to FacebookShare to Pinterest
Labels: Personal

Email ThisBlogThis!Share to TwitterShare to FacebookShare to Pinterest
Labels: eCommerce

C#: Difference between int and int32

Email ThisBlogThis!Share to TwitterShare to FacebookShare to Pinterest
Labels: Programming

Maye said on Wednesday, March 30, 2011 5:56 PM
This same attack is now happening with tadygus.com instead of lizamoon.
Antony said on Friday, April 01, 2011 10:44 AM
Just to be clear to those who actually know very little about database servers...a database server is not "vulnerable to SQL injection". Poorly-programmed and secured *applications* are vulnerable to SQL injection. It really annoys me to see databases blamed for poor application development practices.
Toyotawhizguy said on Friday, April 01, 2011 4:54 PM
You can block malicious sites by editing your "hosts" file using Notepad. For example, add the following line:
127.0.0.1 www.lizamoon.com #attack site 03/29/11
You can also list the site's IP address instead of the domain name:
127.0.0.1 95.64.9.18 #attack site 03/29/11
I maintain my "hosts" file as "read only" after editing, this protects it from malicious attacks.
Pete said on Saturday, April 02, 2011 12:11 PM
I am still confused by the SQL injection reference.  Usually, an SQL injection is a vulnerability in an application which is then exploited for an persistent XSS or CSRF.  What application has the SQL injection vulnerability? I get that RSS may pick up the persistent XSS but it has to get into a DB to start with and it can't get into a DB without an app.  Which app has the vulnerability?

Arun: No answer found so far

Websense updated: 1st April 2011 12:16pm PT
The domain stats-master111.info was registered on October 21, 2010 which could mean the first attack happened then but we don't have any evidence of that. The first confirmed case that we know of is from December 2010, but we didn't make the connection to LizaMoon until today. The last domain, milapop.com, was registered today.

Q: How does the script get added to the compromised sites?
A: We're still looking into that. We know that it uses SQL Injection to do it and not XSS as some of our blog readers have suggested.

Q: When will the LizaMoon attack be over?
A: Not anytime soon. We're still seeing references to Gumblar, which was a mass-injection attack found in 2009.

..I'll update if I found any news. Please share your experience and solutions.
Posted by Unknown at Sunday, April 03, 2011 No comments: